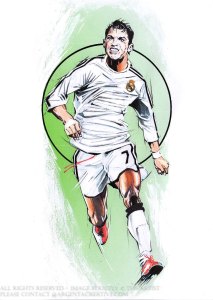 Considered the best player in the world and regarded by many as the greatest footballer of all time. Cristiano Ronaldo, born in Maderia started his career in Portugal playing for Sporting CP before transferring to Manchester United in the Premier League in 2003. He won an FA cup, three Premier League Titles and a UEFA Champions League Title before transferring fo £80m to Real Madrid in the Spanish LA Liga. He won 15 Trophies with Real and become the clubs all time top goal scorer. Ronaldo became the first player to win 5 Uefa Champions League Titles . Ronaldo transferred to Serie A giants Juventus for €100m an Italian record and also a record for a player over 30 years old. Ronaldo has also played 154 times for Portugal scoring 85 goals,and captained the side to winning Euro 2016 and is now the highest International goal scorer of all time.Ronaldo has 5 Balon d’Or and 4 Golden Shoe’s